We at Serve the People are proud to stand with Defend Our Hoodz who leads the charge against local gentrification (violent urban removal of the working class). We support and endorse the boycott against Blue Cat Café as we have for over a year. People ask why? We understand that adopting cats is a great thing to do which is enough to earn the establishment an initial amount of support from casual observers, but please look a little closer.

Blue Cat Café sits on top of the ruins of Jumpolin which embodied the culture and climate of the east side when real estate developers illegally demolished it while it was stocked with piñatas. The community wasted no time organizing a boycott of F&F ventures. Rebecca Gray, now owner of Blue Cat, was made completely aware beforehand that anyone doing business with F&F on this site would be targeted. She did not heed the peoples’ warnings and has joined in with the likes of her landlord Jordan French in making wild allegations and hurling racist insults at the Chicano community of the east side.  Some might think that hiding behind some cats can absolve Rebecca Gray, and a very few even cross the picket line to stand up for her, like the neighbor who Rebecca has bribed with free coffee and donuts. It is good for us that the majority of folks are not that cheap and we keep on fighting.

So let’s talk about the cats. The Austin American Statesman wrote in their article yesterday while insinuating that Defend Our Hoodz were responsible for vandalism that “The owner of the Blue Cat Café discovered profane graffiti against “you gentrified scum” on the walls of the building early Friday after vandals glued the doors shut, trapping meowing cats inside the eatery.” This is an effort to get sympathy for Rebecca, not the cats. White people began crying online right away about these poor cats. What we want to know is how this actually put any cats at risk? Were they not left with food? How long did it take Rebecca to get into the building and was every entrance sealed? We highly doubt it. As can be seen while protesting, the place has multiple entry points. But the journalist hacks at The Statesman did not find this fact worth reporting. Not only do we applaud whoever it was who took this action, we hope that many diverse actions are taken against Blue Cat Café by the angry community which it sits upon like a blister. Gentrification is a cancer on this city and we want that cancer cut out by any means necessary, from protest to resistance to revolution. While Rebecca chose to keep her name out of the media because the community hates her so much, those who have actually known Rebecca for a long time have reached out to Serve the People, and we have been told the following from several people who we will not name, including former friends and associates: We have been told that Rebecca hates animals, that she used to casually threaten to poison her neighbor’s dog, that she is so unhinged that people have had to cut her out of their lives completely and that she would not allow one of her roommates to keep her cat at home. These are not the actions of a pet lover; these are the actions of a psycho. Rebecca Gray uses cats first as a gimmick to make money and second to gain sympathy for her despicable and vile behavior. 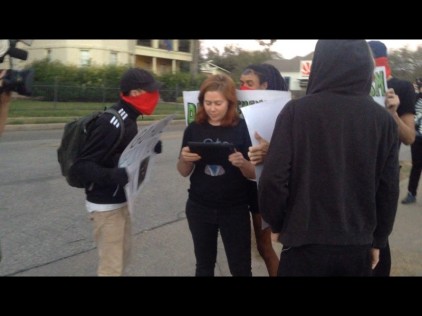 At one point during the demonstration Rebecca came out to instigate protesters on camera, she accused one of our comrades of “making death threats” and she called the pigs. The pigs tried to convince the comrade to leave with them but the crowd told them to fuck off. The pigs failed to get even the slightest bit of compelling evidence, proving yet again that Rebecca was crying wolf; she is a liar and a wannabe snitch making shit up for pity and attention. People like that have short and miserable lives and they always catch karma sooner or later, so remember that Rebecca. The protest itself remained energetic and intense, Rebecca called out a small army of cops who eventually hid inside the café while protesters surrounded the windows shouting “cats yes, pigs no!” and “read the writing on the wall, fuck you get out!” The pigs felt the need to come out and tell us they were going to “let” us keep protesting but that we had to stay off the property. When the pigs themselves were shouted down, one of them made a gun hand gesture and a bang noise  while pointing it at an activist. These veiled death threats are nothing new for APD and they got a dose of anti-pig protests that night as chants for David Joseph, Larry Jackson, Byron Carter and others who have been murdered by APD could be heard loud and clear.

The good news is Blue Cat Café is the only place in East Austin where you can buy an overpriced cup of tea, pet a cat suffering from worms and get a police escort thrown in for free. The Pigs had to escort the customers of Blue Cat past a mob of angry community members to their cars. While we had no intention of doing anything to these patrons past the point of educating them on the boycott, we find that it is important to note that the patrons are usually rich white hipsters or other types of rich white people. Maybe they should get the police to escort them through our neighborhood every time they come here. This was just a case of the settler police forces protecting settlers. 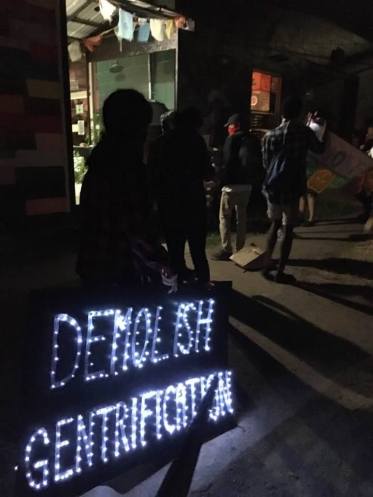 A simple conclusion to this is to ask our readers to become active against Blue Cat Café and anyone else who is part of the process of ripping our communities from under us. Whether you prefer protest or other methods the time is now to strike, picket, protest, resist, and most importantly – rebel!

Join Serve the People and 13 other community organizations who endorse the boycott against Blue Cat Café! Support Defend Our Hoodz and join in the resistance against gentrification. This is not the end but the beginning of a long fight for our homes, communities, culture, and dignity.